Saudi Arabia Launches an International Competition for Quran and Adhan with Prizes of $ 3.2m

Competitions from Around the World Start Electronically

RIYADH, Saudi Arabia, Jan. 5, 2023 /PRNewswire/ — The second edition of the international Quran and Adhan (Muslim call to prayer) competition Otr Elkalam was launched in Saudi Arabia, with prizes that are the largest of their kind in the world, exceeding $3 million (SAR12 million). The competition starts from the competition’s website, according to His Excellency Counselor Turki Alalshikh, Chairman of the Board of the General Entertainment Authority (GEA). 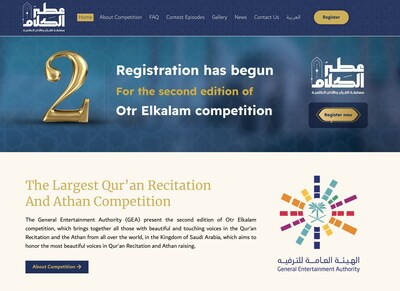 Those wishing to compete in the competition, which is organized and supervised by GEA, can apply electronically from anywhere in the world. Otr Elkalam is the first competition to combine Holy Quran recitation and Adhan competitions, in addition to being the largest in its field in the world.

The second edition of Otr Elkalam includes four stages. The first begins with registration on the competition website and uploading an audio clip for evaluation by the Jury, which in turn nominates the candidates for the second stage in which the contestants will record new audio clips in which they may qualify for the third stage.

Evaluation standards rise according to the competitive stages. The best contestants in the third stage are nominated to the fourth stage, which includes the final qualifiers, whose competitions are shown during the holy month of Ramadan on MBC and the Shahid application.

The competition, whose first edition was presented in Ramadan 2022 AD/1443 AH, introduces the world to the tolerance of Islam, the richness and diversity of the cultures of the Islamic world and the vocal methods of reciting the Holy Quran and raising the call to prayer, in addition to supporting, empowering and celebrating creative and talented people.

Since the inception of the competition, the GEA has allowed contestants from all over the world to participate, with easy online registration procedures through the competition website. The number of registered contestants in the first edition reached more than 40,000 from 80 countries.

Mary McCartney Celebrating 100 Years of Photography on the Ocean Waves